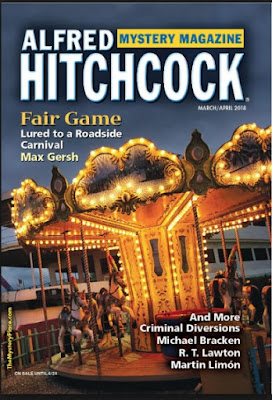 This is a short story I wrote  two days after a Black man named Philando Castile was shot to death by a policeman in Minnesota.  Alfred Hitchcock Mystery Magazine published it.

If you want to share it, please link to this page rather than copying it.  Thank you.


NOBODY GETS KILLED
by Robert Lopresti

Burr saw the flashing lights in his mirror and swore.

It was dusk on a lovely summer evening and he was on a country road, miles from town.  He put on his right turn signal and steered the BMW to the curb.

Once the car was stopped he pulled his wallet out of his pants and removed two cards.  Of course, his registration and insurance form were in the glove compartment.  Damn it. He should have pulled them out first.

In the mirror, he saw the cop slowly approaching.

It was too late to reach for them now.  He put his hands on the steering wheel, at ten and two, just like they teach you in Driver’s Ed class.

The cop had his right hand on his holster.  In his left he held a flashlight above his shoulder.  The evening still seemed a little bright for that, but okay, whatever made him happy.  Burr looked into the light, trying not to blink or turn away, or do anything else that might register as suspicious.

A White cop and a Black driver on a country road.  What could possibly go wrong?

“Do you know why I stopped you?”

“One of your tail lights is out.”

Had that sounded like Burr was challenging him?  “I’m sorry.  I didn’t know.”

Burr’s hands didn’t move.  “My license is on top of the dashboard.”

His right hand stayed in place but with his left he picked up the two cards and held them out the window.

“Thank you.”  The officer held them under the flashlight beam.  “This is a carry permit.  Are you carrying a gun now?”

“That’s where my registration and insurance are, too.”

“Oh.”  He could see the cop thinking about that conundrum.  Damn.  Why hadn’t he taken them out first?

“Would you mind stepping out of the car, sir?”

The cop backed up several steps.  “Slowly.  Please keep both hands where I can see them.”

“Okay.  I’m unlocking my seatbelt.”  And with his right hand he did that.  Then he opened the door and pushed it slowly open.

The cop was watching carefully, flashlight now trained on Burr’s hands. Burr stood up, slowly.
“Do you have any weapons on you?”

“Okay, please turn around.  Put your hands on top of the car.”

He did so, making sure they were far enough to the sides to be visible from behind.

“Just stay where you are.”

The cop moved around the front of the car, never facing anywhere but straight toward Burr.  He opened the car door almost as slowly as Burr had.

Burr tried to remember what else might be in the glove compartment. Nothing illegal, but stuff tends to accumulate, doesn’t it?  Maps.  Sunglasses.  Receipts.  How hard would it be for the cop to find the registration and insurance forms?

His back was aching from leaning forward against the car, which was ridiculous.  He’d been there, what?  Two minutes?

The cop took his time, looking back at Burr after each piece of paper he examined.  Finally he rose.  “They seem to be in order.”

“Good.”  Burr started to straighten up.

“Please stay there a moment more, sir.”  The cop walked back around the front of the car.  “I have taken custody of your weapon, temporarily, for my own safety.”

“I’m going to go back to my car and run your paperwork.  That’s standard procedure.  It’ll just take a few minutes.”

The cop got into his prowl car.

Burr stared into the headlights.   He felt a bizarre, irrational, desire to run away, just to see what the cop would do.  Shoot me in the back?  It had been known to happen.

There were no witnesses handy. Nobody pointing a cell phone at them, maybe hoping to film a tragedy that would go viral the next day.

It would be a stupid thing to die for, keeping your gun next to your registration form.  How could he be so careless?  Every time you left the house you had to ask: what will happen if the police stop me again?  His mother had warned him: A Black man driving a fancy car is just asking for trouble.  But what Black man isn’t?

The last time he had been stopped the officer had said: Why do you need a gun?

He wanted to ask her What business is that of yours? Or Would you ask a White man?  But Life Lesson Number One is don’t talk back to a cop.  Ever.

She never bothered to explain why she stopped him. He guessed she figured they both knew.

When Ronald Reagan was governor of California he had said there was no reason for a citizen to be carrying loaded weapons.  But that had been a reaction to the Black Panthers exercising their Second Amendment rights.

Burr thought of a joke he had heard a couple of times, always told by a White person.  It was supposed to be one of those urban legends.

A cop pulled over a car with four Black men in it and when he walked up he saw eight hands out the windows, in plain sight, touching the roof of the car.

“Where you from?” asked the astonished cop.  “Los Angeles,” came the answer.  Or “Chicago.”  Whichever city had the worst reputation that year.

But it didn’t have to be a big city, did it?  Ferguson, Missouri.  North Charleston.  Waller County.  Baton Rouge.

And the cop who had stopped him tonight; no doubt he had his own atlas of place names, places where police officers had been shot down. New Orleans.  Seattle.  And now Dallas.

A car came driving up the road.  Backup for the police?

No.  Just an SUV driving by.  It slowed down and the White faces inside took long looks at the Black man standing on the shoulder of the road.

How long had he been waiting?

Burr thought about everything that could still go wrong.  Maybe some Black man had stolen a BMW tonight.  Maybe some other Esau Burr was wanted for murder.  Maybe the cop’s wife had left him and he hadn’t had a good night’s sleep in two weeks.

And, of course, maybe this cop was looking for a chance to finally use his gun.  Or on the other hand, maybe the man was a goddamn saint, a regular donor to the United Negro College Fund, just trying to make sure he stayed alive to the end of his shift.

That was the damnedest thing, wasn’t it?  You couldn’t tell, not if the cop was polite, didn’t sneer, or swear, or offer all the obvious and not-so-obvious clues.

Good guys and bad guys looked the same when they were at the far end of the flashlight.

And here came the cop, moving a little faster.  “Everything checks out.”

“Here’s your paperwork.  I’m going to let you go with a warning on that light.”  The cop sounded cheerful, as if that made everything all right.

“Get it fixed tomorrow.”

“Oh.  Right.”  The cop looked down at his hand as if he had forgotten what was in it.  He held it out, barrel pointed to Burr.

And Burr took it that way, his fingers nowhere near the trigger.  “Thank you.”

“My pleasure. You have a fine evening.”  The cop was smiling.  Pleased with himself, and with Burr too.   See?  This is the way it’s supposed to go.  Two good citizens cooperating.

Burr got back in the car.  He put the gun back in the glove compartment.  Left the registration and other papers on the passenger seat.  He would have to decide what to do with all that stuff in the future.

He put his hands back on the steering wheel to control the shaking.

The cop was right.  It was a fine evening.  Burr didn’t get shot. Didn’t get arrested.  Didn’t even get a ticket. Nobody got killed.

So why did he feel like a bug that just hit a windshield?

Posted by Robert Lopresti at 11:45 AM

Email ThisBlogThis!Share to TwitterShare to FacebookShare to Pinterest
Labels: NObody Gets Killed

Robert Lopresti
I am a prize-winning mystery writer, librarian, and songwriter.